One thing that is mind blowing but, true is that we all fall for the same persuasion techniques for the most part. With this being known we can study best practices and figure out how to apply them to our own businesses. Here are 5 great psychology ideas to use for your real estate lead generation.

A research study focused on testing change in charitable donations to the ACS by adjusting how requests were made in person (door to doo).

As you can see it’s not the biggest change, just a small sentence added onto the original ask. Surprisingly though, researches found that the people who were asked the second line were twice as likely to donate to the charity.

Researchers also found that asking for the penny had no difference in the average donation made per contributor. Meaning that even though they were ‘asking’ for a penny, they still got the same amount of donation per individual as the first line.

Are you for asking for anything on your real estate website? Try to think of little ways that might improve it and don’t be afraid to A/B test it with a service such as Optimizely.

2. Show that you care

Waiters were able to successfully increase their tips by over 23% versus a control by changing a single aspect of their service.

All they did was offer mints but, it’s how they did it that got the biggest returns.

In the study, 3 variations were conducted:

Researchers concluded that it was the personalization aspect that won over patrons hearts (and their wallets).

People love that they were already offered mints but, the server checked again just to be sure that they had everything they needed. It left a hugely positive impression with the customers.

When a customer signs up for your MLS or eBook you can leave the same type of impression on your real estate website/blog by immediately following up to generate this effect. Offer a free consultation, a personal email follow up, or even follow up your MLS leads with a free eBook. Make sure your consumers can feel your appreciation and they will love you for it.

3. When admitting your faults can work for you

Study’s show that it can actually be good to admit when you come up short.

In a study to measure the effect of admitting faults there were tests conducted that had participants reading one of two fictitious company reports that had two separate reasons for the company doing badly.

The conclusion of this study was that by admitting in their shortcomings, the people reading the reports thought that it actually showed that the company was in control, despite having a poor performance.

Blaming outside occurrences that couldn’t be controlled (even if true) often had the skeptics in the study viewing companies as not having the ability to fix the problem, but also as false or flakey.

Lesson: If something isn’t working, own that it’s not working and come up with a solution to fix it. Sellers/ /Buyers might actually respect you more.

4.  When scarcity is real, give instructions on what to do.

In a study participants were tested to see what their reaction and follow up percentage would be when given an urgent, fearful message.

Scarcity is deemed as one of the 6 pillars of influence as mentioned by Robert Cialdini. In real estate, scarcity can be very real along with urgency.

Researches suggests that scarcity is not actually as effective unless it comes along with instructions on how to follow up.

In these two control groups they were both given a different pamphlet:

Participants who received the second pamphlet (with follow-up information) were much more likely to take action on getting vaccinated, and just as interesting, were more receptive to processing the information on the dangers of tetanus.

This made them not only more engaged, but more likely to “make moves” as well.

Lesson: There are many situations in real estate where scarcity is completely real. To make sure that our clients follow through when needed we have to give instructions that show them the way. Saying “This house is gonna sell fast.” Is not enough.

Most people would say that they actually enjoy being an “individual”, and don’t like being labeled.

But still research has found that when nudging people to get involved most people respond favorably to being labeled.

What happened: After being casually interviewed about their own personal voting patterns, half of the participants were told that they were likely to vote since they had been deemed by the researcher to be more politically active, and the other half were not told anything.

The end result was that those in the group ‘labeled’ as more likely to vote ended up voting far more often. On election day that group had 15% higher total turnout than the control group, despite they were selected at random.

We seek to maintain consistency in what we do, even if this didn’t exist before. Therefore it causes us to act like those we’ve been labeled as in order to maintain a consistent personality.

The trick is to get people to imagine themselves in a favorable group (smart investors, luxury home buyers, intelligent first time home owners, etc) and they will likely take actions to remain a part of that group.

Lesson: People will take action in order to maintain a consistent personality when they are ‘labeled’. 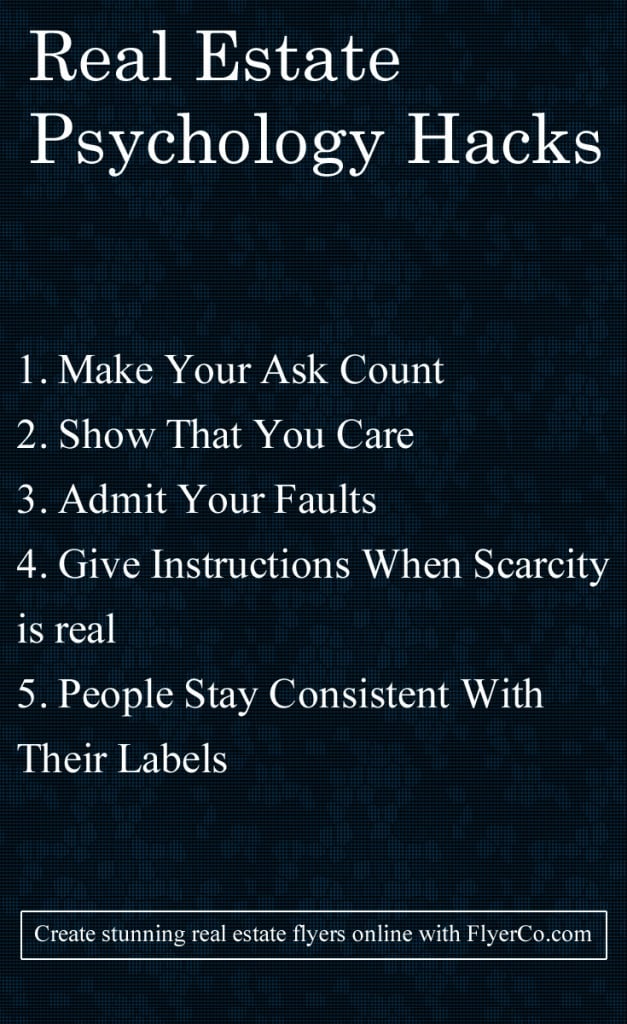 And don’t forget to check out www.flyerco.com to create real estate flyers online.